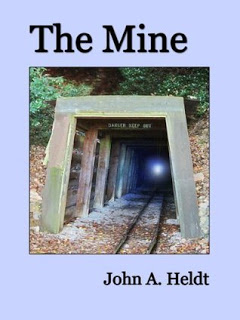 Book Summary:
In 2000, Joel Smith is a cocky, adventurous young man who sees the world as his playground. But when the college senior, days from graduation, enters an abandoned Montana mine, he discovers the price of reckless curiosity. He emerges in May 1941 with a cell phone he can’t use, money he can’t spend, and little but his wits to guide his way. Stuck in the age of Whirlaway, swing dancing, and a peacetime draft, Joel begins a new life as the nation drifts toward war. With the help of his 21-year-old trailblazing grandmother and her friends, he finds his place in a world he knew only from movies and books. But when an opportunity comes to return to the present, Joel must decide whether to leave his new love in the past or choose a course that will alter their lives forever. THE MINE follows a humbled man through a critical time in history as he adjusts to new surroundings and wrestles with the knowledge of things to come.

Review:We were quite surprised but happy at the level of skill this book was written with. There were a numbers of times where the prose delighted us so much we laughed out loud and read and reread certain passages just because they were written so well. There’s a comparison involving hell that was so good and unexpected that we read it out loud to a number of our friends and family. We won’t spoil it for you, you’ll have to read the book to get the reference but it was a such an excellent phrase we wished we’d written it. All of the characters were well developed and we quite liked following along in Joel’s wake. It’s a great premise with, what do you do if you’re transported into a time on the threshold of the Pearl Harbor disaster? We would have preferred it to be a little bit harder for Joel to find a way to get home. Considering the fact that there aren’t a whole lot of plot twists available when the main character is stuck in another time — the climax and biggest problem is obviously getting back, and if he can go back whether or not he does go–. All in all though a great book, one we will be reading again! 😀