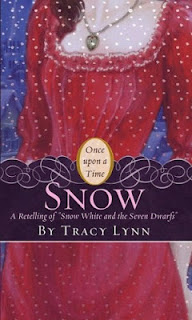 ** Sorry this is a couple of days late, I was the Maid of Honour for my sister’s wedding this past weekend. Y’all know how that goes sometimes. Cheers.

I mean, the uh peacock flock had to chow down on some wedding cake, so (cough, cough) they couldn’t write the review. 😛

Book Summary:
The Duchess Jessica’s childhood began with a tragedy: her mother’s death. Her father, heartbroken at the loss of his beloved wife, could not bear to raise the child. Largely ignored, Jessica spent the first eleven years of her life running free on the family estate, cared for only by the servants.
Then her father decides to remarry, bringing an end to Jessica’s independence. At first her new stepmother just seems overly strict. But as Jessica grows into a beautiful young woman, it becomes clear that her stepmother is also wildly — and murderously — jealous of her.
Jessica escapes to London. Going by the name Snow to hide from her family, she falls in love with an odd band of outcasts who accept her into their makeshift family. But when her stepmother appears in the city, repentant and seeking her forgiveness, Jessica will have to decide whom to trust…with her life.

So we don’t think we’ll ever pick it up again. It’s a retelling of Snow White and the Seven Dwarves. Except in this one there’s only 5 ‘dwarves’ -which are actually half human/half animal type being. Oh and there’s no kiss to wake Snow up after she sleeps. (She also asleep for years! Gah!) There’s no real magic, per se, just a lot of witchery and mechanical/electrical type stuff. Pretty creepy actually. The main guy that Snow falls for comes as a bit of a surprise, (the bad kind, not the good kind) and there’s hardly any scenes between the two of them. It was interesting how they did -finally- wake Snow up, and there was quite a cute ending to it. But umm yeah. We weren’t that impressed.