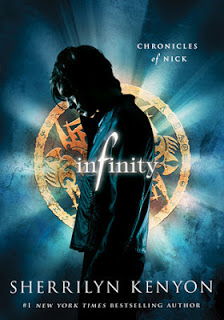 Book Summary:
At fourteen, Nick Gautier thinks he knows everything about the world around him. Streetwise, tough and savvy, his quick sarcasm is the stuff of legends. . .until the night when his best friends try to kill him. Saved by a mysterious warrior who has more fighting skills than Chuck Norris, Nick is sucked into the realm of the Dark-Hunters: immortal vampire slayers who risk everything to save humanity. Nick quickly learns that the human world is only a veil for a much larger and more dangerous one: a world where the captain of the football team is a werewolf and the girl he has a crush on goes out at night to stake the undead. But before he can even learn the rules of this new world, his fellow students are turning into flesh eating zombies. And he’s next on the menu. As if starting high school isn’t hard enough. . . now Nick has to hide his new friends from his mom, his chainsaw from the principal, and keep the zombies and the demon Simi from eating his brains, all without getting grounded or suspended. How in the world is he supposed to do that?
Review:
We liked the premise and really liked Nick’s voice from the beginning. But there were quite a few info dumps, most specifically for characters and what they looked like, which is a deterrent. Have to admit by about 3/4 of the way through the book we were so tired of the fact that almost every single female described in the book was drop dead gorgeous or the like. Rubbed us the wrong way so much that it felt like the text was objectifying women, even if that wasn’t the intent. We did like the world building and enjoyed the references to the setting. Although with this being New Orleans we would’ve liked a more consistent feel of this through the dialogue, plus we were surprised when beignets were mentioned quite a ways into the book. If it’s such a prominent setting we gotta know it early on. The other thing that really bothered us was the some of the internal monologue and dialogue of Nick. When you’re a teenager you don’t ever refer to yourself as such, or reference the angst or whininess. It just is. Can’t think of a single teenager that we know right now who has resisted the urge to be “angsty” or “whiny”. They may decide to not be grumpy, or to keep their mouth shut and not be snarky, but yeah using those terms gave the novel an artificial feel and brought us out of the narrative. Essentially, there was some good stuff we liked, and we’re going to finish this series and probably the Dark-Hunter one after this, but there were some things that prevented this from being an “Oh My Gosh WOW! You have to read this book”.